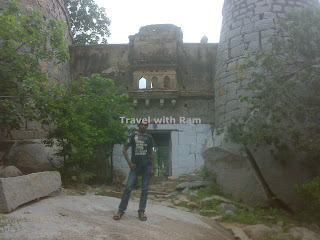 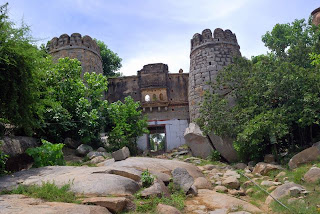 Anegundi, older than Hampi, is situated on the northern bank of Tungabhadra River. Huchappayana matha temple (with black-stone pillars and dance sculptures), Pampa Sarovara, Aramane (a ruined palace), Ranganatha temple,Kamal Mahal, and Navabrindavan are the major attractions. Nimvapuram, a nearby village, has a mount of ash believed to be the cremated remains of monkey king Vaali.

Anegundi, believed to be the monkey kingdom of Kishkindha in the epic of Ramayana, is at a distance of 5 km from the historical site of Hampi. Anjanadri hill, the birth place of monkey-god Hanuman, and the mountain Rishimuka are the other places near Anegundi associated with Ramayana.

It is said to have one of the oldest plateaus on the planet, estimated to be 3,000 million years old. So, only local story-tellers refer to Anegundi as the maternal home of Bhoodevi (Mother Earth).

Neolithic history is represented in this region by Mourya Mane, a several-thousand-year-old ‘Stone Age Colony’. Several Neolithic dwellings still bear paintings that are clear and intact even to this day. “This is the rare human settlement where we will find traces of Microlithic, Megalithic and Neolithic age of human life at one same spot. Anegundi area is much more than the Vijayanagar empire, and as is old as the planet. Till date, this village is a living heritage site in its true sense Anegundi is best visited along with Hampi. 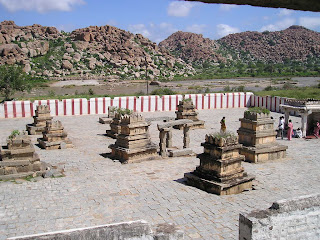 Navabrindavanam Situated on a small island on the Tungabhadra, Navabrindavanam has the Samadhis (tombs) of nine saints, followers of Madhvacharya, and predecessors of Sri Raghavendra. Madhvacharya himself merged with the divine at Badrinath, and thus does not have a tomb, while Sri Raghavendra’s Samadhi at Mantralyam is a famous pilgrim place in Andhra Pradesh. This is among the few places where nine saints who headed a peetham have their tombs, and its importance lies in the fact that these saints are believed to have attained ‘Jeeva Samadhi’, that is, they are believed to be alive even today under their tombs! 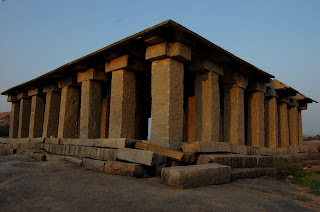 upstream along the Tungabhadra River, passing a few
small temples and a ghat where women were washing clothes in the river. In a few minutes we
reached the landing for the coracle which ferries passengers, motorbikes and bicycles across
the river to Virupapur Gaddi.
We walked through Virupapur Gaddi, which consists mainly of a few low-cost guesthouses
and restaurants, and little else. It is said to be favored by some travelers because of the
easy availability of drugs and the laid-back atmosphere.
Email ThisBlogThis!Share to TwitterShare to FacebookShare to Pinterest